In October/November 2012 Jack Geldard and ROB GREENWOOD  will be on the Hongu Valley, Nepal on an expedition to attempt the first ascent of the North Face of Peak 41.
The mountain has only seen one ‘official’ ascent and this was via its more accessible south face by a Slovenian Expedition, this is to be the first attempt from the more remote north side. 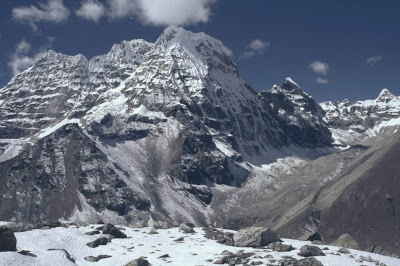 Loben Expeditions - autumn expedition landed Lukla and heading for chamlang Base camp, from where a team of 06 will attempt CHAMLANG, PEAK 41  and HUNKU peak.

Team successful reached Lukla this morning though we had to use different means to get into Lukla, some by flight, some by helicopter and all the baggages' by MI -17. Naomi and Jill with Palden were booked to fly to Phaplu an alternative airstrip to Lukla but luckly weather at Lukla got clear and the flight landed at Lukla, which saved them 03 days of walking to get into Lukla.

A survivor of Mount Everest's worst disaster in eight years has blamed overcrowding on the world's highest peak for his friend's death last weekend.

Song Young-il, 47, of Daejoen, South Korea, told the Daily Telegraph he and his friend Song Wong-bin suffered snow blindness, delirium, and hypothermia as they waited four hours for more than 300 climbers to pass.
When they finally continued their descent, Song Wong-bin collapsed in the notorious section of Everest known as the 'dead zone' for its perilous conditions.

His comments come amid growing concern over the increased risks posed by 'over-climbing' on the mountain during the narrow window between April and June when it briefly becomes surmountable.

Song Wong-bin, 44, was one of four climbers who died last Saturday after reaching the peak early in the morning. A German doctor, a Nepali-Canadian businesswoman from Mumbai and a Chinese man were also killed in poor weather conditions. Dr Eberhard Schaaf, 62, from Aachen, is understood to have died after being caught in an avalanche, while Wang-yi Fa, and Shriya Shah were killed after being thrown down the slopes by high winds.

Their 'Eco' project was aimed at clearing some of the rubbish which has accumulated on the peak from decades of mountaineering expeditions, including the removal of some dead bodies which had been abandoned on the slopes.On Friday Sherpas were moving the latest four victims to Camp Three and were hoping to send them by helicopter to the Nepali capital Kathmandu.

In a telephone interview from Everest base camp, survivor Song Young-il said he and his friend had reached the summit at 7am with three Sherpas and were making their descent when they became stuck at the perilous 'Hilary's Step', the major obstacle between the summit and South Col, three hours below.

"Then there were so many people. There were 300 to 400 people going to the summit and we got stuck in a traffic jam. We had to wait 200 metres from the summit and we became snow blind. We waited for four hours. We couldn't see.
"We started to come down, slowly, slowly, with the help of our Sherpas. It was hard because we couldn't see anything. It took too long and after that we became crazy," he said.

Loben Sherpa, one of the expedition leaders, explained that as hypothermia and snow blindness set in, the men's brains started 'working unusually.' "At 8500 metres, your brain stops working and you start losing consciousness, because of lack of oxygen, waiting for four hours, hypothermia," he said.

He believes Song Wong-bin's team may have been caught by traffic because they had made their ascent so early and were halted on their way down.

The three Sherpas in their team were helping the climbers down towards South Col on the notorious 'Balcony' when "the other Korean collapsed and died. he died because he had to wait for so long, in my opinion. If you have to wait that long at that altitude it's very dangerous," he said.

The surviving five members of the Korean team were upset, he said, but philosophical. "It's not a good feeling when someone dies, but everyone who comes to Everest knows the risks, it's 50-50 die or live. This area, above South Col, has been recognised as the 'dead zone' and it is very risky," he added.

An early morning call from BC by Budhi Magar (our expedition Cook) "dai,   Dipankar, Rajiv,  Nga Tashi Sherpa and Karma Sherpa summit Mt. Lhotse at 07:00 a.m. We just had communication. They are all in good condition and will be heading back after staying for 15-20 minutes. They will contact again after they will reach last camp - communicate by walkie-talkie from Summit to BC.

Lhotse stands at 8516m, making it the fourth highest mountain in the world. It is situated at the border of Tibet and Nepal. Its long east-west crest is located immediately south of Mount Everest, and the summits of the two mountains are connected by the Souath Col, a vertical ridge that never drops below 8,000m. Lhotse has three summits: Lhotse Main 8516m, Lhotse Shar 8383m and Lhotse Middle or East 8413m.

A team of 03 member from west Bengal Dipankar Ghosh, Rajiv Bhattarchary and Soma bhattacharjee set for Mt. Lhotse expedition on April 05, 2012 from Kathmandu and reached Base camp on April 15, 2012. The team after setup all the camps and after undergoing successful acclimatization climb, planned to climb Mt. Lhotse on May 20, 2012. They reached last camp on May 19, but had to retreat back to Camp II due to high wind and unsafe route condition of Mt Lhotse. After a rest of two days in Camp II, team carry on with second plan to summit on May 25, 2012. Three of them along with their 03 Sheraps (Karma, Nga Tashi and Dorjee Sherpa) set off for Camp III on May 23. Soma Bhattarcharya on May 24 had to quit the climb due to her health condition and climbed down to Camp II with Dorjee Sherpa. However, Soma Bhattarchaya is probably the first woman from Bengali Community to reach 8000m and spend a night at last camp of Mt. Lhotse.

Dipankar, Rajiv, Karma and Nga Tashi continue with their climb to last camp on May 24 after few hours of rest at last camp, they carry on with climb and reached the summit of Mt. Lhotse at 07:00 a.m. on May 25. All team members are safe and heading back to Base camp, they will come back to base camp on May 27.  By Loben Sherpa – Expedition Director Loben Expedition, Kathmandu 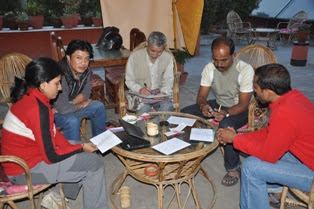 An early morning call from Budhi Magar (our Expeditions BC Cook) "dai,   Dipankar, Rajiv,  Nga Tashi Sherpa and Karma Sherpa summit Mt. Lhotse at 07:00 a.m. They are all in good condition and will be heading back after staying for 15-20 minutes. They will contact again after they will reach last camp - communicate by walkie-talkie from Summit to BC.

Kaji Sherpa and Phurba Sherpa of Loben Expedition climb Mt. Everest on 19 May. Kaji Sherpa is the first civilian from Sikkim (a small Himalaya state of India). They successful summit Mt. Everest at 10:15 a.m.came down to south col safely.

Our Lhotse expedition reached Camp IV this morning with a  plan to summit tomorrow but since the weather forecast of high wind is expected, the team probably would decide to come back to camp II and the plan for summit attempt on later date. To be safe is always wise...

"Gives you the joy of discovery and an aspiration to live. It is an activity which exercises and develops the best of mental, moral and physical characteristics in a person. More than anything else it enables a person to discover himself.”